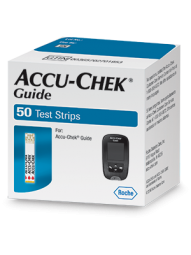 Item DescriptionDiabetes is complex. Your testing doesn’t have to be with the Accu-Chek Guide test strips. With a fumble-free SmartPack vial and a design that lets you place a small drop of blood anywhere along the end of the strip, it’s a surprisingly simple way to manage your diabetes.

Accu-Check Guide Strips is a medical device for determining the approximate concentration of glucose in the blood. It can also be a strip of glucose paper dipped into a substance and measured to the glucose chart. It is a key element of home blood glucose monitoring (HBGM) by people with diabetes mellitus or hypoglycemia. A small drop of blood, obtained by pricking the skin with a lancet, is placed on a disposable test strip that the meter reads and uses to calculate the blood glucose level. The meter then displays the level in units of mg/dl or mmol/l.